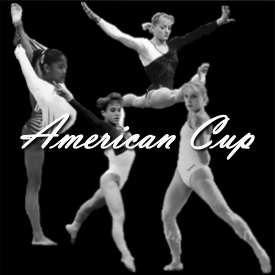 The American Cup is an annual elite senior level international all-around competition that takes place in the United States, and is generally considered to be one of the first major competitions of the gymnastics season, as it is held in March or February of each year. Gymnasts from all over the world are invited to qualify for the competition. While most of the gymnasts who have won the competition were American gymnasts, some foreign gymnasts have won as well, including gymnasts from Romania, USSR, France, Ukraine, Russia, China, and Spain.

In 2011, the FIG included the American Cup as part of the newly revamped World Cup series.