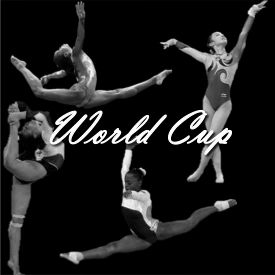 The Artistic Gymnastics World Cup is a competition for artistic gymnastics sanctioned by the Fédération Internationale de Gymnastique (FIG). The gymnasts are invited based on the results from the previous World Championships or Olympics Games and the winners are awarded prize money.

In 1975, the Fédération Internationale de Gymnastique (FIG) sporadically decided to organise an original competition, reserved for the current best gymnasts. It was composed of a single and unique event, bringing together very few gymnasts in all around competition and in apparatus finals, giving just the slightest hint of a gala.

This atypical competition was therefore entitled the Artistic Gymnastics World Cup. This initiative was taken in a particular context, since the World Championships took place merely every 4 years.

This schedule was kept until 1990, the year in which the world championships cycle was modified. In 1997, the FIG Executive Committee updated and made its international calendar consistent and took the decision to hold a World Cup Final (in even years) in alternance with the World Championships (in odd years).

At the FIG Council in Cape Town (RSA) in May 2008, the members decided no longer to run any World Cup and Series Finals for all FIG disciplines from January 2009. In 2011, the World Cup were restarted, held multiple times over the year. The FIG included the American Cup as part of the World Cup series.